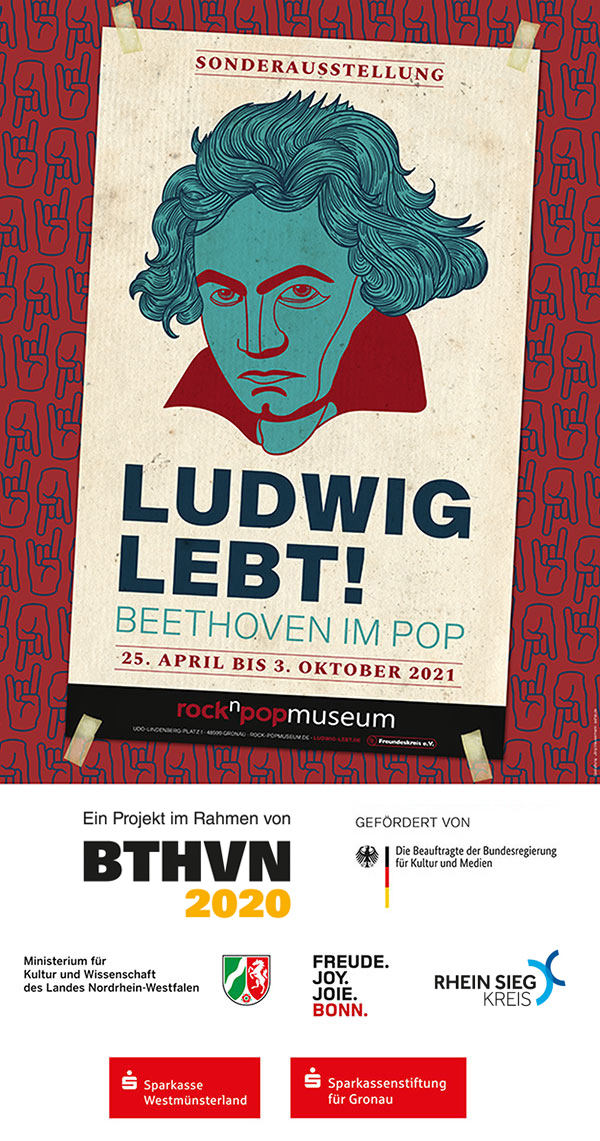 During his lifetime, this man was already a star. And the lust for Ludwig has not diminished since then. E.T.A. Hoffmann, Richard Wagner and Thomas Mann dealt with Ludwig van Beethoven and his work, as did also Chuck Berry, Stanley Kubrick and the rapper Nas. In pop, the Beethoven myth exploded and ultimately opened up its very own Beethoven reference space in music, films, cartoons, literature and pop art in many parts of the world, which has never been developed so extensively otherwise.

The issues that preoccupied Beethoven during his lifetime - violence and pathos, genius and masculinity, the role that Beethoven plays in national and international interests - are probably more urgent than ever today. On the composer’s 250th birthday, the Ludwig lives! exhibition highlights some of the obvious and surprising traces of Beethoven in pop, starting with his fifth symphony, which was sent on an infinite mission into space in the Voyager space probe. Ludwig lives! shows traces of Beethoven in bands such as the Beatles, Accept, Electric Light Orchestra, Die Toten Hosen and artists such as Helge Schneider or Judith Holofernes, in films such as A Clockwork Orange and Elephant or Inglorious Basterds, as well as in cartoons such as Peanuts and Goofy.

The Rock’n’pop Museum’s special exhibition is curated by a nationwide team of experts. An academic exhibition catalogue completes the exhibition subject-matter. Due to the current situation, we were unfortunately unable to organise a planned, equally extensive supporting programme with family concerts, workshops and special guided tours.